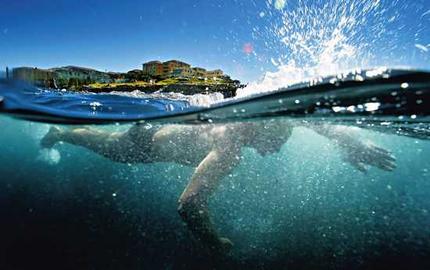 To float or swim: it’s a decision we all make, every day.

Paddling into this new tributary (from corporate engineer to fine furniture maker) has been no doubt easier than if we already had ‘kids’ – that ubiquitous word meant to capture a whole level of unspoken understanding.

I wonder what the chances would have been of making this decision had we a couple of mini-Chiltons? I hope I would have realised my trajectory was not so set in stone that I couldn’t have made the same decision. Naive? Sure, give me that luxury. But isn’t one of the most important provisions a young child needs (after love, food and shelter) inspiration and belief in themselves? Opening their eyes up to the myriad opportunities and telling them they can be or do anything they want chimes a false note when they see their mother or father return drained from a day of demanding but otherwise unfulfilling work. What messages are you inadvertently sending them? Inspire them with a love of living and resist following the herd.

Herman Hesse captures this idea powerfully – even reproachfully – in Steppenwolf:

“The bourgeois prefers comfort to pleasure, convenience to liberty, and a pleasant temperature to that deathly inner consuming fire.”

Since making the decision to quit my job and embark on a completely new career path, I have never been concerned with the risk of ‘giving it all up’. My frame of mind on this has been helped by understanding the inherent bias and well understood phenomena known as the sunk cost fallacy. As David McRaney explains:

“The misconception is you make rational decisions based on the future value of objects, investments and experiences. In truth, your decisions are tainted by the emotional investments you accumulate, and the more you invest in something the harder it becomes to abandon it.”

When attempting to peer into the future, we see goals and the things we want. Again, pointing to what I mention in my first post, what we miss if we do this too often is the state of being in the moment and understanding fully that “it is always now”. I originally chose a path that I thought would deliver what I wanted to be, not how I wanted to live.

Hunter S Thompson hits the point perfectly in a letter he wrote to his friend Hume Logan in 1958 about his thoughts on how to find your purpose and live a meaningful life:

“The answer — and, in a sense, the tragedy of life — is that we seek to understand the goal and not the man. We set up a goal which demands of us certain things: and we do these things. We adjust to the demands of a concept which CANNOT be valid. When you were young, let us say that you wanted to be a fireman. I feel reasonably safe in saying that you no longer want to be a fireman. Why? Because your perspective has changed. It’s not the fireman who has changed, but you.”

He goes on to say that the question so few people realise to ask is “whether to float with the tide, or to swim for a goal”. As much as I thought (and was told) I was swimming, I was actually being carried by inertia of the tide.

Floating on the tide is made all the easier by the paradox of choice. Barry Schwartz, in his satirically piercing TED Talk presentation, describes how “choice has made us not freer, but more paralysed, not happier but more dissatisfied”. It completely resonates with me when he goes on to explain that the “opportunity costs subtract from the satisfaction from what we chose, even when what we chose is terrific”. He gives the example of a man holidaying in paradise, but distracted by the idea that, being away during this quiet time of year, he is missing the opportunity to get the best parking spot outside his apartment in the city. The paradox of choice goes towards explaining why some people, like me, who are in such a privileged position can sometimes feel so dissatisfied.

My career goal is to be a successful furniture maker, but much more importantly, the path to get there will provide me with the capacity to live a life that is closer to the way I want to live.