It’s done, finished. After three months of making, Black Swan (the hall table I talked about in an earlier post) now has a protective blanket wrapped around it, waiting to be sold to a discerning buyer.

This piece represents many things to me. Without a commission, I was effectively the client and so the piece has some personal themes woven into it. But beyond those themes, the piece also represents a tangible vindication of sorts: I can make. I can design.

The final vindication will be a slower burn, when I start to realise whether I can earn a modest income from this.

The early responses I’ve received have been heartening, much more so than I expected.

Films, books, performances etc. don’t hesitation in spruiking themselves with the early praise they receive to keep the snowball rolling. Not being a large established company, it feels terribly awkward when thinking about taking the same approach. Perhaps that’s the good ol’ Aussie tall poppy syndrome kicking in, but I’ve realised some time ago that you can’t let that feeling hold you back. So here is some of the more imaginative praise for Black Swan:

Having been there every step of the way, it’s hard to separate the feeling of looking at the final piece from all the blood, sweat and tears. Ok, so no tears, but certainly some blood spilled!

Is the piece without faults? No – but I take some comfort that only I or another fine furniture maker could see them. As my tutor Daren Millman says, one of the hallmarks of being a good cabinet maker is how well you fix your mistakes.

I’m now very happy to pass the baton to my marketing manager and life companion Gemma to give it the hard sell to see if we can find a home for it before going back to Australia. If not, then we’ll just take it back with us and continue to try and sell it there.

For more technical detail on the construction, keep reading:

The carcass is made from two 18mm MDF ellipses that I had made via CNC, separated by solid poplar wood that forms the front wall and back rail. The drawer aperture is veneered MDF using pear wood.

I decided to go with CNC for a couple of reasons: Firstly, the time it would’ve taken me to hand-shape the ellipses to come even close to what has come off the machine would’ve been at least a day’s work. The costs stacked up too and if I had hand-shaped the ellipses, as much as I would’ve tried, the final shape and squareness of the edge would not have been as accurate. Any error at this early stage of the making would compound through the rest of the process. I used MDF for the carcass top and bottom because I wanted to have a pear wood sunburst effect, which is where triangles of wood meet at a point to give the effect of a sunrise of sorts. I chose to use crown cut veneer (as opposed to quarter sawn) for a feathered effect, in keeping with the overall style.

Sunburst can only be achieved with wood veneer, as once veneer is glued down, it doesn’t move with moisture like normal solid wood, so the joints would remain just as perfectly tight as the day they were made. MDF is also very flat and very stable with changes in humidity levels, making it the ideal substrate for this kind of work. The flatness is key if you want a fine finish such as the French polish used here, as any unevenness in the substrate will ‘telegraph’ through the veneer and show as a lumpy unevenness on the surface. So solid wood or even plywood are avoided.

The leg channels were routed through after all the veneering had been completed, being careful to keep things square and prevent breakout out through the tops sunburst.

The marquetry is similarly made from veneers for the same reasons of wood movement (and because marquetry can’t be done any other way!). These are my own original design, but laser cut after my initial attempts were nowhere close to the level of precision in the rest of the piece. It was widely acknowledged at the school that to get anywhere near the level of laser cut marquetry would require undertaking a specialised marquetry course in its own right.

I spent nearly two weeks trying to refine the design. After spending months designing the table, I made the mistake of casually thinking the marquetry would be something I could quickly come up with when the time came. Wrong. My first attempts were heavy, without finesse, ill proportioned and sometimes just outright jarring. I was lucky enough to have Daren and Ed push me hard, frequently sending me back to the drawing board, as it would’ve otherwise been too easy for them just to let me carry on to get me out of their hair. Ed’s brutal honesty and specific insights into what did and did not work made the final design all the better for it.  It was a maddening and somewhat bi-polar process to go through, but most importantly – strangely enjoyable. 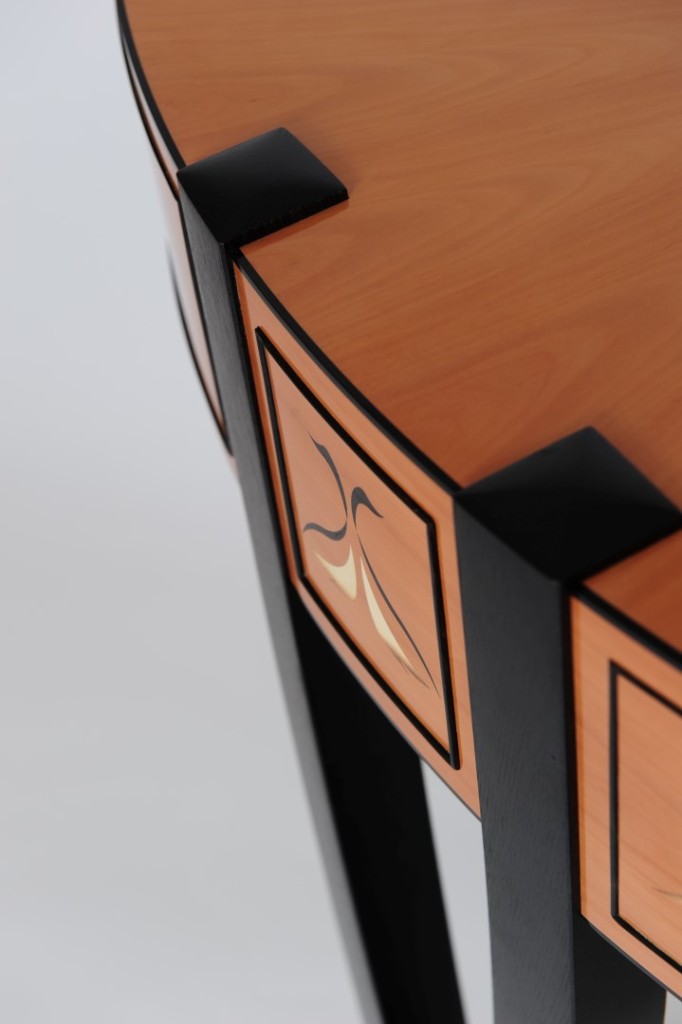 After the marquetry was glued onto the carcass the cock-bead (a 3mm rounded ebony stringline) was shaped from a square stringline. The groove the bead went in had to be cut using a router jig to make sure the cutter didn’t deviate and that the depth remained constant for a radius that was ever-changing due to the ellipse.

The drawer is made from solid English air dried pear wood and ripple sycamore. The pearwood was given to me by my cousin Steve Shipp, who as a tree surgeon in the Cotswolds, has a good eye for any valuable wood he cuts down. The two most important features of the drawer is the piston fit, which means there is absolutely no lateral movement in the drawer and the achievement of being a ‘secret drawer’. Without a drawer-pull, from the outside you have no indication there is a drawer there until you depress the front and it pops out for you to pull. The drawer front also has a ebony bead that frames the marquetry and covers the lap of the blind dovetails.

The legs are made from kiln-dried European oak that has been shaped both with a spindle moulder and router ski. The legs are jointed with a compound angle cross halving that was achieved by first locating the legs together in the carcass and then using this location to form a set of jigs around the joint to allow the router to cut the curved joints. After all the final shaping, the legs were ebonised using a solution of vinegar with wire wool dissolved in it to be applied to the oak, whereby the natural tannin in the oak reacts with the iron in the solution to go pitch black.

The legs were finished with several coats of oil and then two coats of wax. The top was French polished prior to glue-up with the legs.

Did I mention Black Swan is for sale?

Behind the scenes – making Black Swan