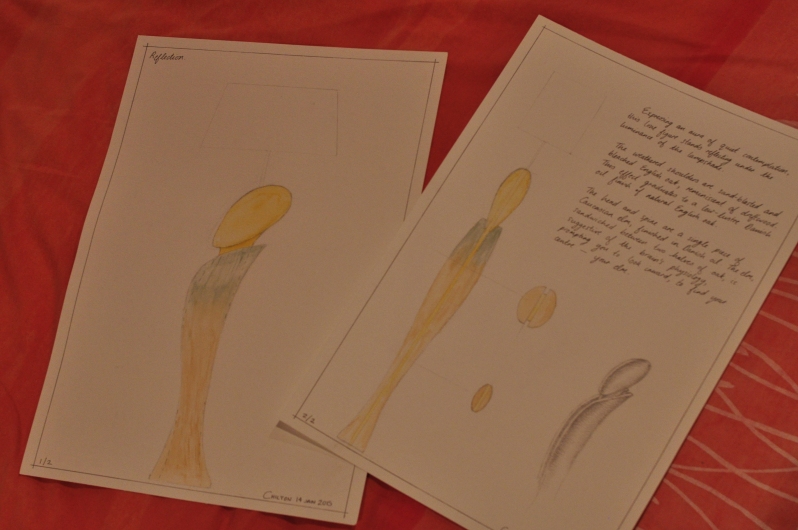 Mastering the tip of the pencil or paintbrush is just as important as mastering the blade of a chisel or plane if you want to become an excellent cabinet designer/maker. Every week we are taught the art of drawing and ‘seeing’; this builds and sharpens our ‘visual vocabulary’ so that when it comes time to pull on the resources of the subconscious for inspiration there is an overflow of material to weave into coherent forms.

At one of these lessons, David explained his process of leading one of his regular clients  through the design process to the point of agreeing on a design and price. To give us first-hand experience, he offered the opportunity to submit a design for a lamp that his client wanted to give to a close friend, for the price of £500. Lots of keen murmurings were made and it appeared everyone was in the race. However, as we came close to the deadline, I heard many going to great efforts to convince themselves it wasn’t worth the effort. Suddenly, in a Steven Bradbury moment, all the others had talked each other out of it and this Aussie was skating across the line alone. Which was a shame, and all the more so for what they’re missing out on. They thought it was all about the money – it’s not.

What this represents is something orders of magnitude more valuable than £500, it’s a chance to start shifting your mindset from just making speculative projects or making coffee tables for Ma and Pa to one of the professional designer/maker.

Even though my design will be the only one under consideration, there is still the chance the client won’t like it enough to grant the commission. If this happens, I’ll still come away richer for the experience, for learning how to listen to a brief, develop a series of ideas and sketches and then present my final proposal using watercolours. If you can’t get this part right, you’re tripping at the first hurdle.

If I’m lucky enough to get the go-ahead, then I’ll be learning how to work to a deadline, transform a set of 2D drawings into 3D form and I’ll have added my first professional client to my network, and, perhaps more importantly, my first advocate.

The brief was loose, and relayed secondhand via David, which meant Chinese whispers was in effect. However, as I understood it, the brief was as follows: The client works in the field of psychology and the lamp was to be a gift for a close friend of the client’s, who had gone through a mental breakdown. The friend made their recovery working as a gardener for a period of time and found solace working with plants. During this time, the friend developed a particular fondness for a tree called Caucasian Elm, so the client liked the idea of potentially incorporating this timber into the lamp. The client also has an affection for driftwood.

Working with such a broad brief was both freeing and challenging, and it took several weeks of ideas before I could get to something I felt responded strongly, which I’ve titled ‘Reflection’. The photo above shows the final watercolours and the hand-written description of the piece is copied below for clarity:

Expressing an aura of quiet contemplation, this lone figure stands reflecting under the luminance of the lampshade.
The weathered shoulders are sandblasted and bleached English oak, reminiscent of driftwood. This effect graduates to a low-lustre Danish oil finish of natural English oak.
The head and spine are a single piece of Caucasian elm, finished in Danish oil. The elm, sandwiched between two halves of oak, is suggestive of the brain’s physiology, prompting you to look inward, to find your centre – your elm.