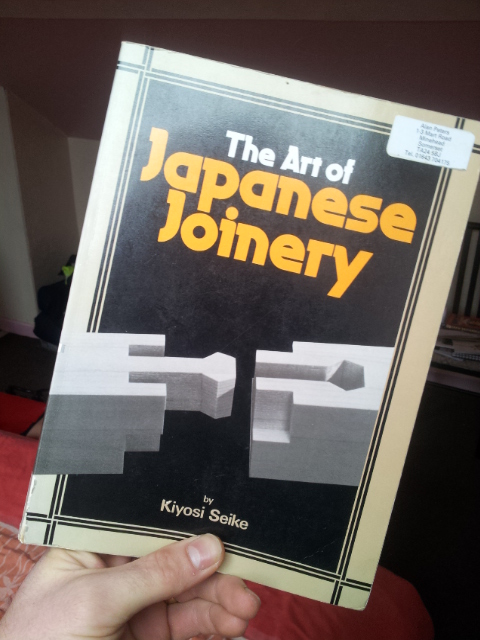 The Japanese have a reputation for taking things to a higher level, and Japanese joinery is an exemplar of this zeal.

I recently dived down the rabbit hole of Japanese woodworking YouTubes – such as this one that beautifully demonstrates some kind of Okkake-daisen-tsugi joint (Rabbeted Oblique Scarf Joint) and this one that shows the annual planing competition, where it’s all about who can get the longest thinnest shaving (try 2m long at 9 microns…). Upon hearing about this, my tutor Ed Wild shared his similar appreciation for the art of Japanese joinery, and loaned me his copy of the aptly titled book, The Art of Japanese Joinery, by Kiyosi Seike.

After getting it home I noticed a little sticker with none other than the late Alan Peters’ name written on it, a highly regarded English fine furniture maker. Ed had picked it up second hand when Alan sold off his business assets at the end a successful career. Alan’s work had clear Japanese influences and had been inspired by time spent in Japan, which explains why he might have kept this book at hand.

As if that wasn’t interesting enough, the author goes onto explain how:

“carpentry in Japan developed within a family-guild system that appears to have been at times unrivaled anywhere in its absolute authority and absolute protection of secret guild techniques. Not only were there specialised guilds, such as those for shrine, temple and domestic construction, but there were rival groups of specialised guilds in different areas of the country.”

While Western carpenters, cabinet makers and joiners have been held in high esteem, you never hear of them being given such gravitas as their Japanese counterparts. Because of this, Japan’s cultural treatment of their woodworkers has allowed some of the most intricate, oldest and astounding timber structures anywhere in the world. One well known example is the To-ji buddhist temple in Kyoto, built in the Endo period (1603–1868) and standing 58m tall. The natural flex of the timber, combined with clever joinery, has allowed the building to remain standing after its contemporary masonry cousins have been decimated by earthquakes.

One of the appealing concepts that the book delves into is the Japanese approach to determining construction proportions. Just like the ancient Greeks often used the golden ratio, the Japanese too had a strong set of systems for determining proportions that met the demands of the building type as well as aesthetic requirements. This is called kiwari. As the author explains, “if we think of design as a method of determining the most beautiful proportions, then in construction we could think of kiwari as a technique for building a module of beauty.”

The majority of the book delves into technical descriptions of dozens of specific joints, which I won’t go into detail here, but if you’d like a taste of some of the more complex ones, check out this joint which is called a Hogyozukuri-nokigeta-shiguchi joint…

I’ll leave it there, as I’ve got to get back on the tools – or as the Japanese call their tools ‘dogu’; translated roughly as ‘instruments of the way’. Such is the Japanese carpenters’ respect for their woodworking implements that if an apprentice stepped over a saw, it was only natural for his master to strike him soundly for showing such disrespect for his dogu, and for the apprentice to accept his punishment without complaint.

As much as I might wish, unfortunately I can’t ever imagine our head teacher and senior craftsman Darren Millman dishing out this punishment that is so often wanting…